History of the Vermilion Parish Library 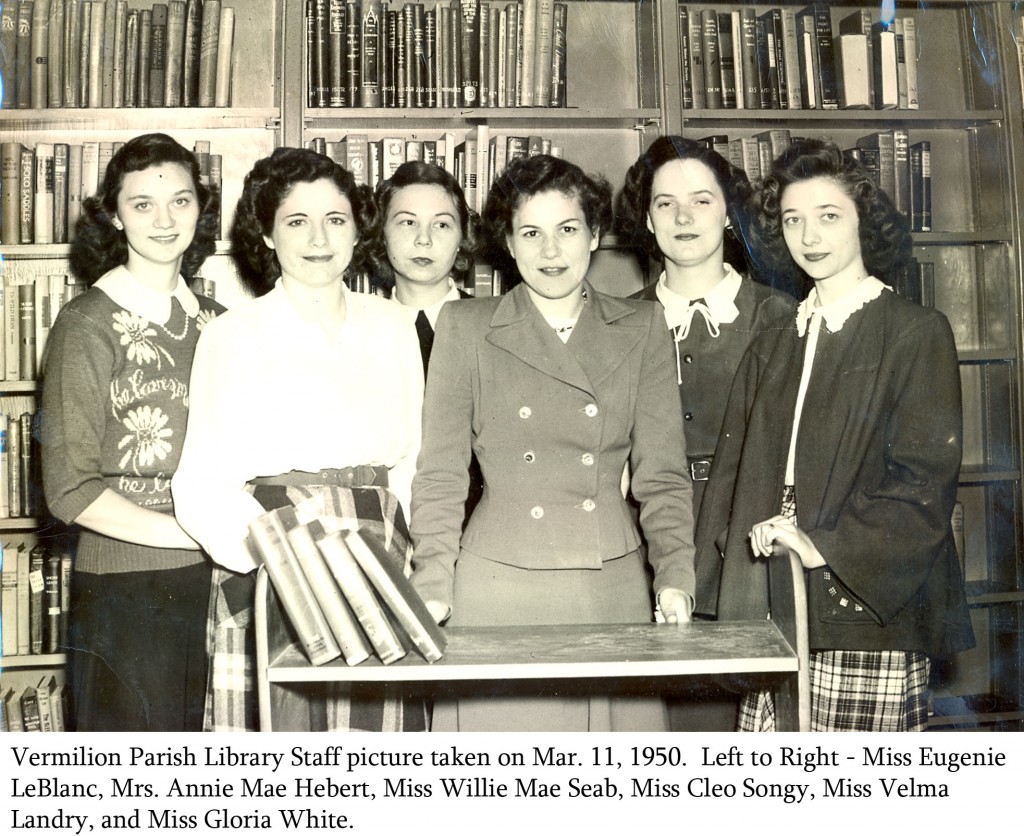 On St. Valentine’s Day in February of 1942, the citizens of Vermilion Parish passed a one-mill tax to make the Vermilion Parish Library a permanent institution. This wasn’t the first try at organizing a public library in Vermilion Parish. Thirty-five years before that, Mrs. W.B. White had started the Abbeville Public Library in 1907 sponsored by the Women’s Club. This Library thrived until 1911 when it closed for lack of funds. In November of 1915, the Women’s Club sent delegates to the Women’s Clubs convention in Monroe where Miss Lutie Stearns of the Wisconsin Library Commission offered her services to help any community with a library problem. Miss Stearns was invited to come to Abbeville early in 1915 and spoke to a large, enthusiastic audience. With this larger goal in mind the Library Board reopened the library in March, 1916.

Meanwhile the Gueydan and Kaplan town libraries had been established and their citizens were library minded and as ready to join any parish-wide movement as those of Abbeville. When Miss Culver, Executive Secretary of the Louisiana Library Commission spoke at the open meeting of the Woman’s Club in September of 1930, she told of the possibility of a demonstration library in Vermilion Parish and a meeting of representative people of the parish was arranged for the next day. The demonstration library with headquarters at the Town Hall was opened on March 4, 1931. At the end of the year’s demonstration, Vermilion Parish was in the depths of the 1932 depression so the Police Jury was unwilling to call a tax election with no hope of passing the tax. The demonstration continued for 18 months on the original appropriation but closed in September, 1932 because of lack of funds. From 1933-1938 the library was supported by funds from the Town Council, but had to close in 1938 for lack of quarters.

In October 1938, J.H. Williams, President of the Abbeville Public Library Association and J.E. Kibbe, Mayor, appeared before the Women’s Club to tell them of the possibility of a second demonstration. The club voted to sponsor the movement but no further action would be taken until August, 1940. In November, the Police Jury appointed the Board of Control of which Mrs. W.B. Macmillan was elected President, Mr. J.E. Kibbe, Vice President, with Mrs. A.A. LeJeune of Kaplan, Mrs. Maurice Montagne of Gueydan and Mr. J.H. Williams of Abbeville as members.

Centrally located quarters were secured in the Masonic Temple for parish headquarters. When after a year of efficient service the tax came up for passage on February 14, 1942, the parish was thriving and a five year tax was passed. Early in 1947, the Library board was informed that the Masonic Temple could not longer be used as library headquarters but that the building could be used until the new location could be found. An investigation revealed that not building large enough was available so the Library Board decided to vote a bond issue and build a permanent Library. The site, across from Magdalen Square in the heart of Abbeville, upon which the Abbeville Town Library had formerly been located (1909) was sold to the Police Jury by the Town of Abbeville. It was decided by the Library Board that since no memorial had been planned for the deceased veterans of World Wars I and II, the new building be planned to serve in this capacity. Early in 1949, the contract was awarded to the M & L Construction Company of Kaplan, La. This building was the first building built in Louisiana with public funds specifically as a library. The Headquarters/Abbeville Branch moved into this building in March of 1950.

Other parts of the parish were also busy during this time. In 1948, the people of Pecan Island raised funds to build a library and health center on the Island. The building was erected by local volunteer workers, the equipment was furnished by the Parish Library and the Health Unit and the building was opened in 1949. It was called the Vaughn-Copell Memorial Building.

Kaplan was the first town to build a branch library building. It was dedicated Sunday, December 21, 1952. It was the culmination of efforts made by many people and organizations. Second in erecting its own branch building was Gueydan. On September 19, 1953, this branch building was dedicated. The Maurice Branch Library is located in a building purchased by the Vermilion Parish Library. It was originally a house but was renovated in 1980 to serve as a branch library. The Erath Branch is currently in a rented location near the downtown section of Erath. The Cow Island Branch began as an extension of the Bookmobile. In 1980 when the Bookmobile broke down and couldn’t be fixed, the vehicle was towed and became permanently parked at the old Forked Island E. Broussard Elementary School. Since that time the branch has moved from the vehicle to the gym to a classroom at the new Forked Island E. Broussard Elementary School to a separate building on the FIEB grounds. This branch is operated in conjunction with the Vermilion Parish School Board.

The Delcambre Branch Library was established in 1964 in a small building next to Delcambre City Hall. In 1980, it moved into an old funeral home/dress shop building purchased for that purpose. Because the town of Delcambre is divided by the parish line, this branch library has the distinction of being operated and supported by both the Vermilion Parish Library and the Iberia Parish Library.

In July, 1999, the voters of Vermilion Parish supported a $6 million bond issue which provided funds for a new Abbeville Branch/Headquarters building in Abbeville, as well as new and/or renovated buildings in Kaplan, Gueydan, Maurice, Erath, and Pecan Island. This tax was again renewed by the voters in 2005.

In 2008 the Bill and Melinda Gates Foundation provided the Vermilion Parish Library with a new Mobile Library completely free of charge. This Mobile library serves the communities of Cow Island and Pecan Island whose libraries were destroyed by Hurricane Rita in 2005.